What we do matters.

At St. Louis Community Credit Union, we exist to serve people living in a region where racial and economic equity are constantly strained. Unfortunately, not all communities in St. Louis have equal access to – not only mainstream financial services – but quality education, healthcare, affordable housing, healthy food, and so much more.
Many people are struggling to make ends meet. But we’re trying to help change that. Our business is to provide hope – financial hope to marginalized, disenfranchised consumers in our community. Through affordable loans and accounts, as well as financial education and coaching, we offer hardworking people a pathway to economic stability.

St. Louis Community can be described in a number of different ways. We’re a financial institution, of course. But we’re also a not-for-profit cooperative; a Community Development Financial Institution (CDFI); a Low-Income Designated credit union; and one of the largest Minority Depository Institutions in the country.
That all being said, we think of ourselves as a social service agency that also happens to be a credit union.
We don’t judge. We simply help. We help by delivering responsible, affordable banking services and lending programs so that low-income and other marginalized people have an opportunity to join the economic mainstream, build assets, and create a better standard of living for themselves and their families.

As a CDFI, St. Louis Community Credit Union can qualify for grants from public, private and philanthropic sources to fund some of the vital programs we bring to neighborhoods across our region:

Sure Rides®Auto Loan program – In 2013, SLCCU received a Financial Assistance (FA) grant from the Treasury’s CDFI Fund to help launch our Sure Rides program. The purpose of Sure Rides is to create economic impact through mobility. We provide affordable automobile loans to low/moderate income individuals and families so they can have access to reliable transportation to get to and from work.
Used autos constitute the largest piece of our lending portfolio, and the loan growth that stemmed from our 2013 CDFI FA award far exceeded expectations. The grant was used to augment SLCCU loan loss reserves so that we could expand our underwriting criteria and make many more loans to people with poor credit.
Over a three-year period, the Credit Union was able to leverage the $849,000 grant into an additional $22.7 million in auto loans to the disenfranchised members of our community – loans that people would not have been able to qualify for otherwise.

Gateway Branch – In 2016, SLCCU opened a branch on the old site of Gateway Bank. When established in 1965, Gateway Bank was the first and only minority-owned commercial bank in Missouri. It took local deposits and made loans in a neighborhood where few other banks focused. In 2009, Gateway Bank was acquired by Central Bank of Kansas City, which operated on the site for three years. In 2012, that institution announced it was leaving the area. At that time, St. Louis was the third-highest underbanked African-American community in the U.S. according to the FDIC.
The St. Louis City NAACP was determined to find a solution to save Gateway Bank. In cooperation with Stifel Bank & Trust, the St. Louis City NAACP connected Central Bank of Kansas City with SLCCU to work out an agreement that allowed the sale of the property to the Credit Union.
Furthermore, St. Louis City NAACP leadership helped point St. Louis Community Credit Union in the right direction to procure a Community Development Block Grant that facilitated completion of the project. The original Gateway Bank building was demolished in 2015. Thanks to additional funding from the Community Development Block Grant, as well as support from the City of St. Louis, Stifel Bank & Trust, the St. Louis City NAACP, TIAA Direct and others, St. Louis Community Credit Union built a new state-of-the art facility while preserving Gateway Bank’s great heritage.
These are just a few examples of how the Credit Union uses the essential resources available to us as a CDFI to serve the most economically distressed communities in the nation.

St. Louis Community is a leader and a voice for social justice in the financial services world. But that’s because we don’t go about it alone. We have built a tremendous network of partners throughout the region, including banks, non-profits, government agencies, churches and corporations.
Please click here to learn more about some of the many organizations with whom we partner.
We all work hand in hand to bring well-tailored products and services to a segment of the population that needs an advocate to help them get back on track financially. Here are some of the many ways we put that collaboration to work for the betterment of our community:

Originally chartered in 1942 as the Teachers Credit Union for the St. Louis Public Schools System, St. Louis Community proudly acknowledges its deep roots in education. So, naturally, our employees serve as educators on a daily basis through one-on-one coaching at both the teller line and member service desks. Plus, members can obtain a free copy of their credit bureau and score. We also feature an over-the-phone financial counseling service called BALANCESM, which gives our members the opportunity to chat with an expert at their convenience.
In addition, we work with our affiliate non-profit, Prosperity Connection®, to offer group financial education seminars and individual coaching sessions at various Excel Centers® around the region. Click here for more details and class schedules.

Affordable healthcare is a relative term. That’s why the Credit Union is committed to bringing health-related services directly to the communities we serve. Free health screenings are available at SLCCU branches via Siteman Cancer Center to mobile site visits throughout the year.

Knowledge is power – especially when it comes to buying a home. Not only does St. Louis Community Credit Union provide fair and affordable home loans, we work with partners such as Carrollton Bank and the St. Louis Association of Community Organizations (SLACO) to offer free classes on first-time home ownership and asset development.

SLCCU formed a Faith-Based Task Force comprised of representatives from faith communities who are committed to eradicating the perpetual cycle of poverty. The group fulfills its mission by collaborating with area clergy to bring trustworthy financial and educational services to the unbanked and under-banked population in distressed areas of St. Louis. 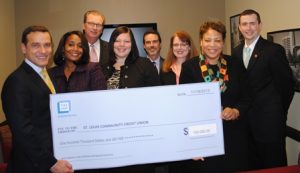 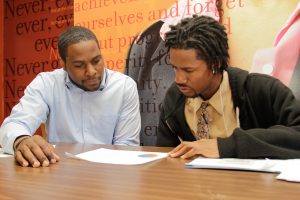 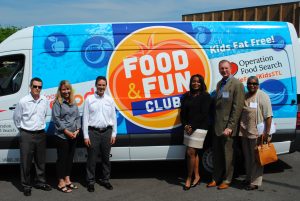